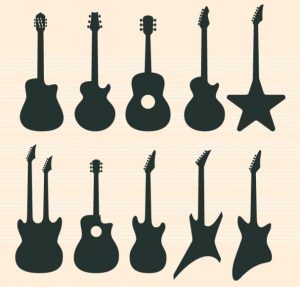 We have all been there.
Learning a new tuning or multiples tunings can quickly become confusing and overwhelming because all of a sudden your visual landmarks don’t make sense anymore.

So how to make something unfamiliar become familiar?

Well, the key is to use what you have learnt from previous tunings and apply as much as you can to the new tuning.

By finding similarities and connections between the new tuning you’re learning and previous tunings you’ve learnt, you’ll be able to quickly build a visual fretboard map for the new tuning.

Learning this will help you:

So let’s discuss the first benefit of learning the tuning interval layout.

Learning chords is a powerful thing because it will help you build a fretboard map quickly.

The other benefit from learning chords is that you can learn both your chords and note names at the same time.

So when you strum the open strings, you get a D major chord.

From there you can quickly learn your straight bar major chords all over the fretboard.

Now let’s try to use this knowledge of the tuning interval layout to apply chord shapes, licks and patterns you already know.

The key here is to compare your new tuning to a tuning you already know.

Compare that to open D and you’ve got the following chart:

You could also visualize open D tuning as a GBDGBD tuning without the lower third (the 5th string) plus a root on the 1st string.

But it can be a daunting dask and once again we can use the power of intervals layouts and connections between different tunings to learn quicker.

If you’re lucky, you’ll already know all the note names.

For example, if you know your standard guitar tuning EADGBE and try to learn dobro in GBDGBD tuning, it will just be a matter of learning a new tuning layout with note names on strings you already know (G, B and D)

If you’re less lucky, like in the case of knowing GBDGBD and then learning DADF#AD, you’ll have to learn the note names of strings you’ve never learnt before (A and F# in this case).

But again, we can find shortcuts.

But that could be confusing so let’s try to use your knowledge of the tuning interval layout assuming:
– you know your chords
– you know the note names of each chord

With your knowledge of the tuning interval layout, you can quickly deduce the note names of your F# string.
Since F# is the third of a D major chord , each note on this string will be the major third of the chord with its root on the 6th, 4th or 1st string (remember the 1, 5, 1, 3, 5, 1 layout).

Let’s sum this up with a chart:

Also note that when you learn the notes on the A string, you only need to learn it once because once you know the note names on your 5th string, you’ll also know them on the 2nd string (since both 5th and 2nd open strings are an A).

So as you can see, it’s all about finding short paths to learn quicker and to apply what you’ve learnt from a previous instrument is a great way to do that.

And not only can you apply your theory knowledge to the new instrument but you can apply previous techniques you’ve learnt as well!

This can work both ways too: try to apply what you’ve learnt from your new instrument to other instruments you already know how to play.

So give yourself time, don’t make your head explode 🙂 and get used to how the new tuning sounds like, find out what you like about it and how you can make nice music with it, it’s all about exploring and having fun! 🙂

1 thought on “How to learn multiple tunings ?”