Home » Blog » chords » How to find straight bar chords on a steel guitar instrument in any tuning? 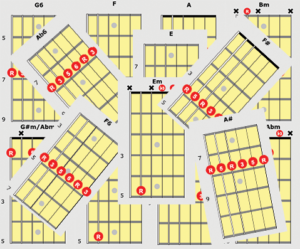 In this article, i would like to explain you one of my methods to find straight bar chords on a steel guitar instrument in any tuning.

The first thing you need to understand is how we build chords.

By stacking thirds, that means we have four different possible triads:

Let’s do the same with 4-note chords, also known as 7th chords.

There are now 7 possible permutations of major and minor thirds (the eighth one cycles back to the root thus is the same as the augmented triad), which gives the following chords:

This is probably a lot to absorb at this point so i would recommend to first understand how this works rather than learning everything by heart (although it’s a good idea to know at least the interval layout of triads as well as major, minor and dominant 7th chords 😉 ).

Using those charts as a guide, the next step is to analyze your instrument’s tuning to find out the different third invervals that could make chords.

Let’s try that with the common dobro tuning, GBDGBD.

So of course we get a major triad by strumming all 6 strings but if we take a closer look at the intervals in each group of 2 adjacent strings, we get:

Now you can see this minor third interval between both strings 5 & 4 and strings 2 & 1 so you can get instant minor chords by picking the notes of either of those string groups!

Using the two chord charts above, this gives us several chords possibilities:

Now, let’s do the same thing with a C6 tuning (CEGACE).

Once again, we get an obvious major chord straightaway by playing the bottom 3 strings (or all 6 strings omitting the 3rd), but if we look at the intervals in each group of 2 adjacent strings, we get:

But we’ve also got a “b3 -3” group between strings 3, 2 & 1 which opens up several chords possibilities:

You could also use this minor third interval between strings 5 & 4 to get a different minor chord than the one on strings 3, 2 & 1.

So lots of possibilities as you can see and we’ve only scratched the surface: we could also look at intervals between non-adjacent strings, chord inversions, extended chords…

Now, there’s one last trick i want to share with you.

One thing you might notice with this approach of finding chords is that although you can easily get major or minor shapes, you’d sometimes want full chords or maybe even more shapes.

This is where open strings come into play.

By using open strings, not only can you get full chords but also chords you would not be able to get otherwise!

For example, if we get back to our GBDGBD tuning example:

So this brings out a whole new world of possibilities BUT you will also quickly find out that this does not mean every chord shape you’ll find will sound good… it will just depend on the situation: some chord shapes will sound good when you play them in a solo situation while others will sound better when used in a band situation with other instruments.

There are no rules there but the more shapes you know (or at least understand how to build), the more possibilities you’ll have when it comes to writing, arranging or improvising.

Before finishing, i would like to give you a little challenge: could you apply what we just did with an open D tuning?

1 thought on “How to find straight bar chords on a steel guitar instrument in any tuning?”